To achieve even more room for encounters of all kinds, to enable that the people that met at an evening in the container see each other again and to ensure that our goal to create a longstanding community during our stay we made the Container a even more open space in the year 2018, where people of all cultures and across all generations and social classes could meet and to unleash positive energy and to fuel hope. To make it such a place we experimented with new ideas and reduced the number of cooking events in favor of new formats and motivate the citizens to ulilitze and shape the container themselves. 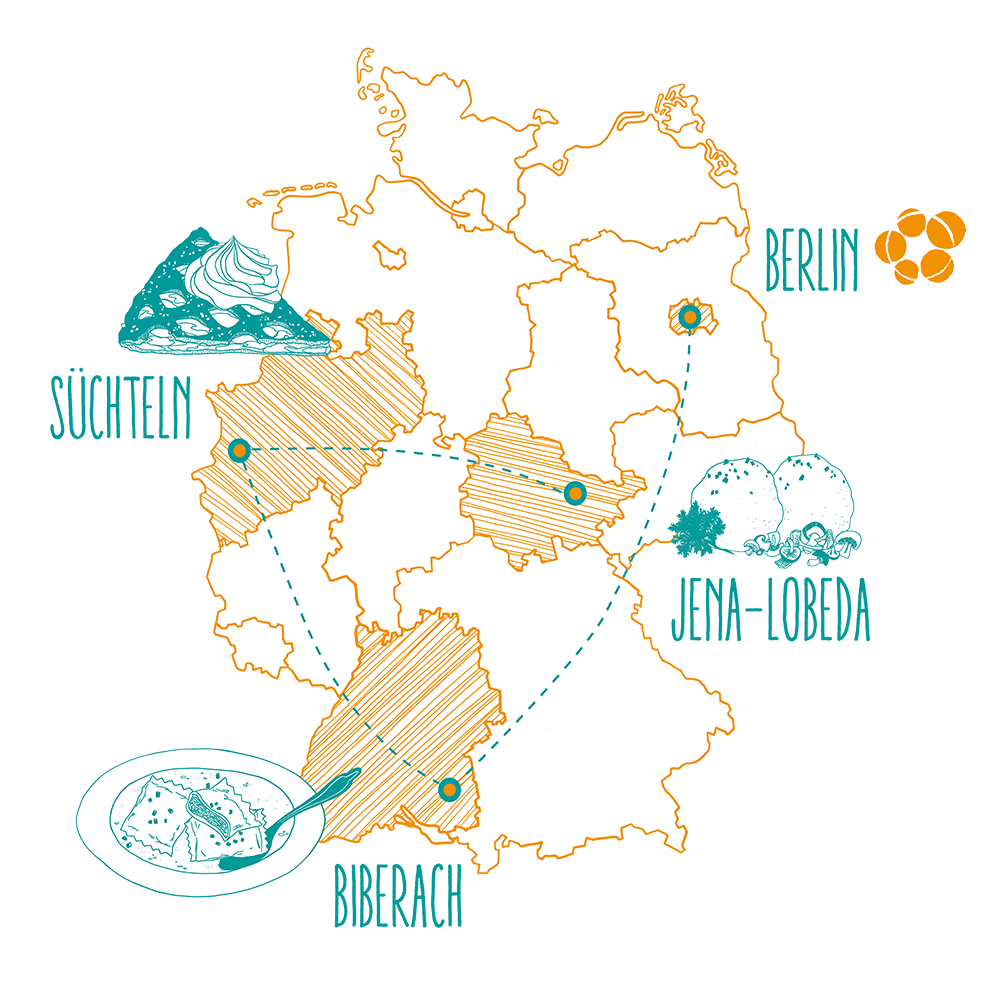 Biberach is the first location of our tour 2018. Inbetween the library, the theather and the museum, the container stands on the central ‘Viehmarktplatz’ and soon everybody in the small swabian city has recognized it. After the first two weeks, all of the cooking evenings are fully booked and on the weekends, the local fans of the container or the Foodsharing community are taking over and organize afternoons with lots of waffels, can-throwing and disco soups. Biberach offers its citizens a high standard of living.

The abundance of local companys create working spaces and around the historic half-timbered houses there is a cosy athmosphere full of friendlyness. The distinct swabian culture makes the people be pleaseantly down to earth and we notice that it is helpful to know ones one identity to not get confused when encountering a new one.

Also amongst the people that have experience as a refugee, there is a broad identification with the city. The favourite recipe from Ahmads from Syria is “Herrgottsbscheißerle with Tabouleh” and Roman from Afghanistan know the city better than many of the old residents. Most of the people feel well because there are many possibilites afar from meeting the basic needs, that enable to shape one’s future.

In Süchteln, we collaborate with the charitable association ‘Königsburg 2.0. e.V.’, which offers a wide-ranged cultural programm and provides enough reasons for the people of the surroundings to spend their saturday night in Süchteln.

The association’s aim is not only to revive the landmarked Jugendstil-ballroom in the heart of the city but also to attract a diverse audience and to establish the ballroom as a place of encounter for people of all cultures. Like this, it offers the perfect infrastructure for the forming community. Never has our blue friend been in such a small place and captivated so many people at the same time.

“It feels like Süchteln has awaken from its thousand-year Rip Van Winkle sleep” says a market vendor on the occasion of our farewell. And actually, we also have the feeling that the container has changed the spirit as in no other place before. 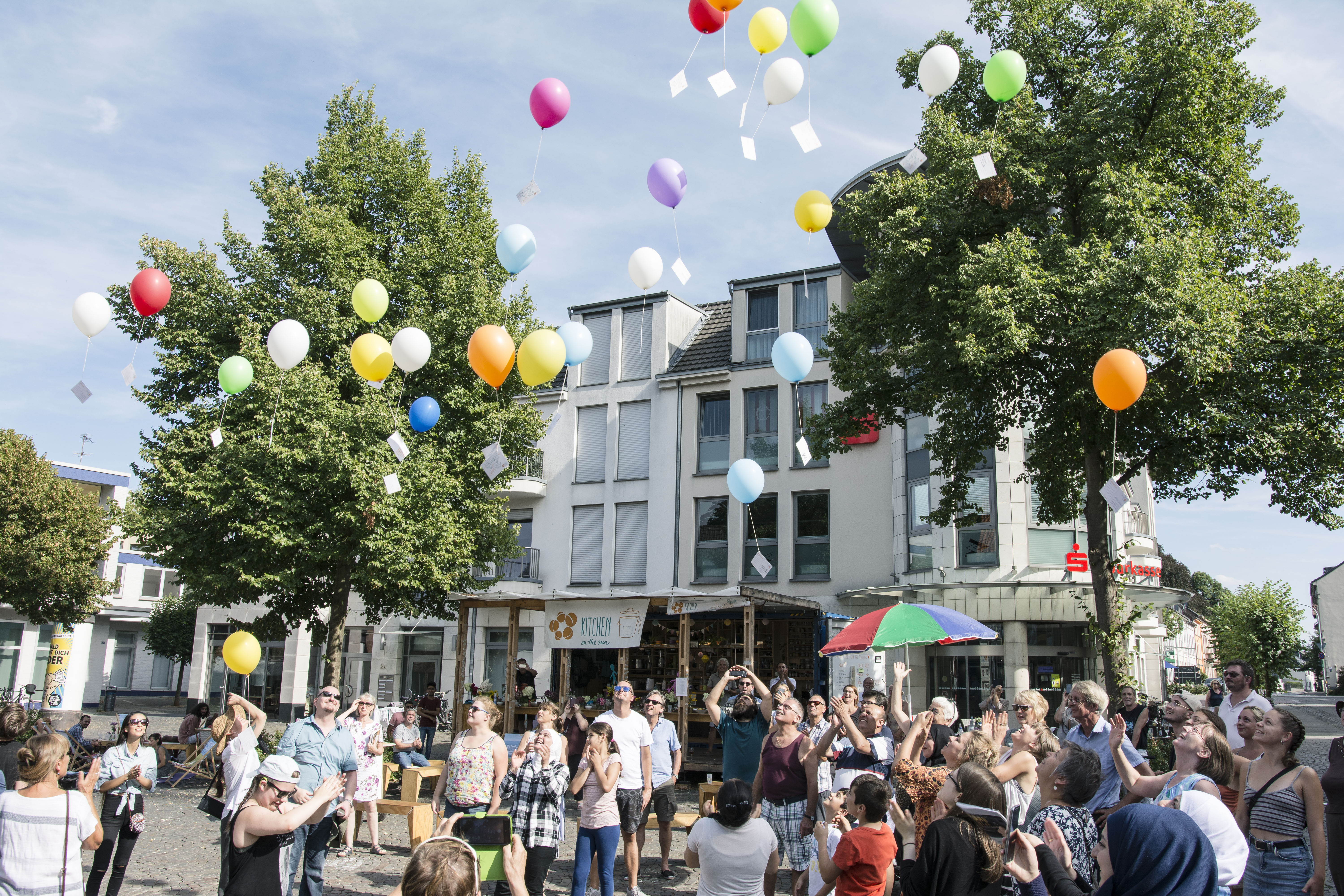 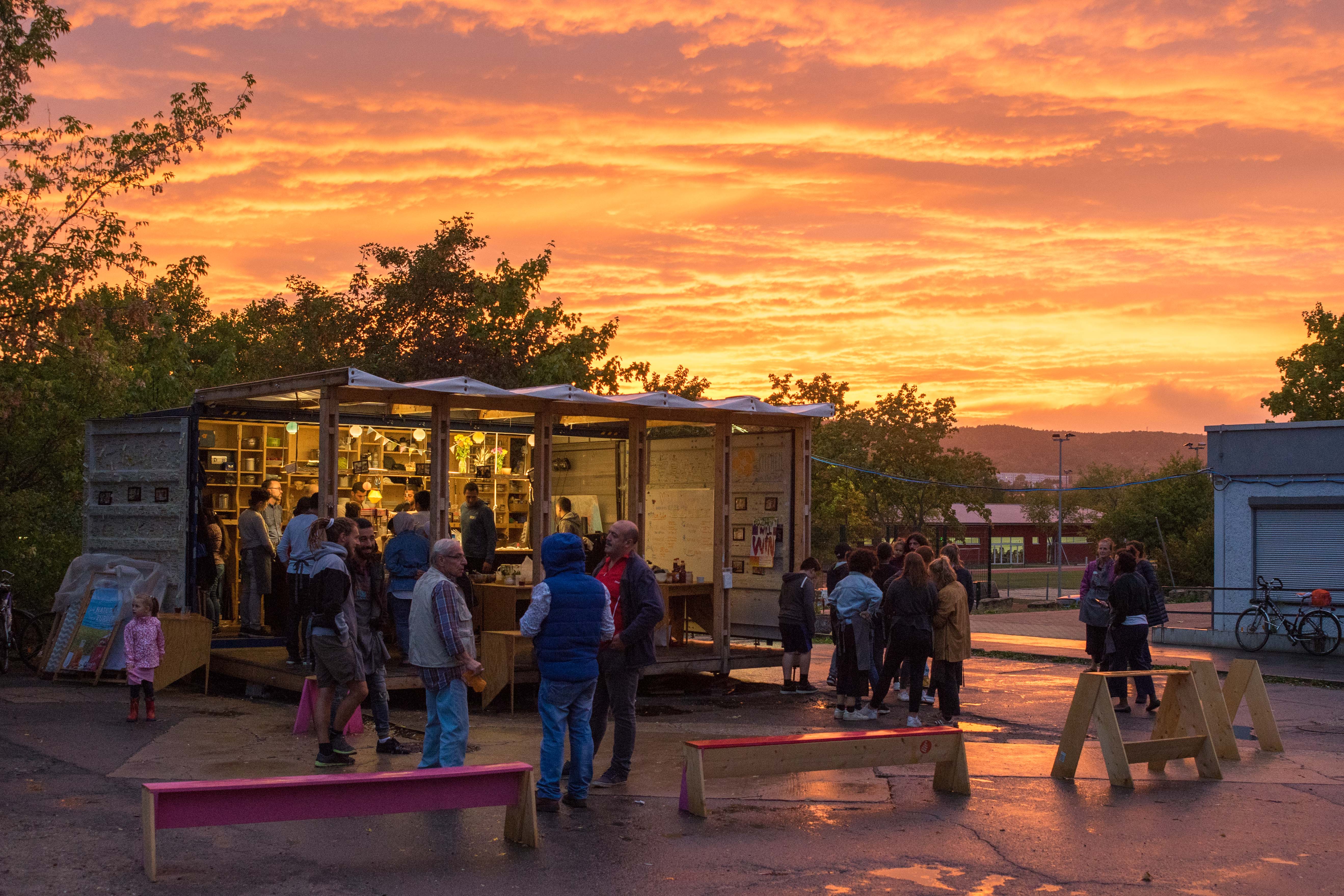 Many know Jena’s suburb Lobeda only from driving along the highway that passes right between the grey multi-story tower blocks. At first glance, this panorama ruled by concrete does not seem very welcoming. On our arrival, the major of the district introduces it as the city of the four seas: in the moring it is a sea of fog, in the day a sea of concrete, in the evening a sea of lights, and in the night the sea of nothing.

One of the buildings has a slogan in bright blue letters that can be seen from afar, which says “I see something that you can’t see”, which remarkably fits to the split perception of the suburb: While the general picture of it is often soaked with prejudices, the daily routine of the Lobedaer looks different. Most of the people like to live here. With the container we are located between the school, the refugee accomodation, a soccer field and a student’s residential home on the parking lot of the center of encounters ‘KuBuS’.

Soon we become the central point of meeting for many of the people with experience as a refugee that live in Lobeda  and would like to get in touch with Germans much more. We have to spent much energy in getting in touch with the other groups of the local citizens. But the effort paid off.