In 2016, Kitchen on the Run traveled through Europe. For four weeks we visited the cities of Bari (Italy), Marseille (France), Duisburg (Germany), Deventer (Netherlands) and Gothenburg (Sweden). This journey followed a route from southern to northern Europe. On the one hand, to point out the “classic” escape route of many people at the time of planning (January 2015), and on the other hand, because the countries visited at the time took up the most people with escape experience within Europe. 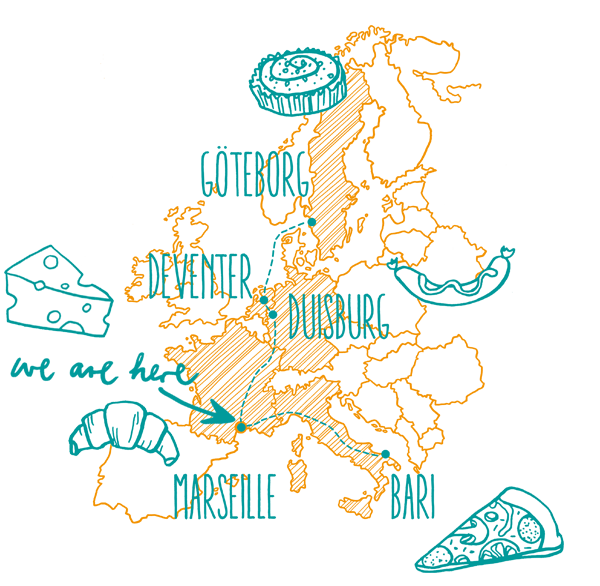 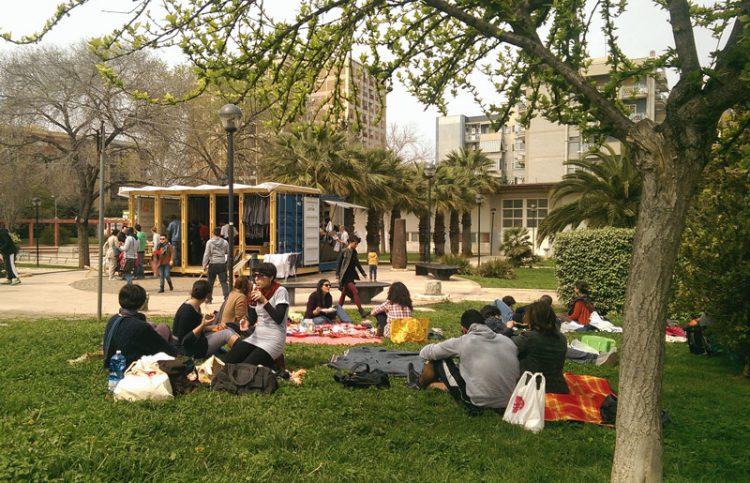 Parco Don Tonino Bello. The southern Italian city with about 300,000 inhabitants became the first location of our trip. In a public park in a classic residential area north of the center, we cooked and ate under palm trees, surrounded by flowering trees and greenery.

The cooking evenings in Italy are characterized by great cordiality and the Bareser’s passion for local specialties like homemade orecchiette or tiella barese (a rice dish with mussels) to share with people. The interpersonal warmth and the lively coming together in the container kitchen are contrasted with the economic problems we are seeing in the region. Bundled with the strong focus of the local population on their own families and a little multi-cultural cityscape, the conditions for refugees to integrate themselves into society are criss-crossed by many obstacles. In addition, many refugees are at least mentally in transit and plan, as soon as they have papers to strike further north – but such a “transit” takes sometimes two to three years.

Comptoir de la Victorine in the district of Belle de Mai. The district is one of the poorest in Europe and one of the most colorful in the already multicultural Marseille. With a population of 850,000, much brighter and larger than any other location on our trip, the container found a temporary home in the yard and parking of a former match factory that is now home to several artist organizations.

Belle de Mai is not a place where you happen to come by. Some locals even refer to the area as a no-go zone, mostly without ever being there. At the same time, the neighborhood only sparkles with different nationalities, skin colors and cultures. A diversity that, unlike in any other location, is also reflected in our container, which becomes a meeting place between cultures, but also between social classes. The self-evident multicultural differences in the city feel many refugees as very beneficial. At the same time, the emergency provisions that were in effect during our stay are also present as a result of the Paris terrorist attacks: a latent fear and insecurity of many refugees from raids and police controls is clearly perceptible. 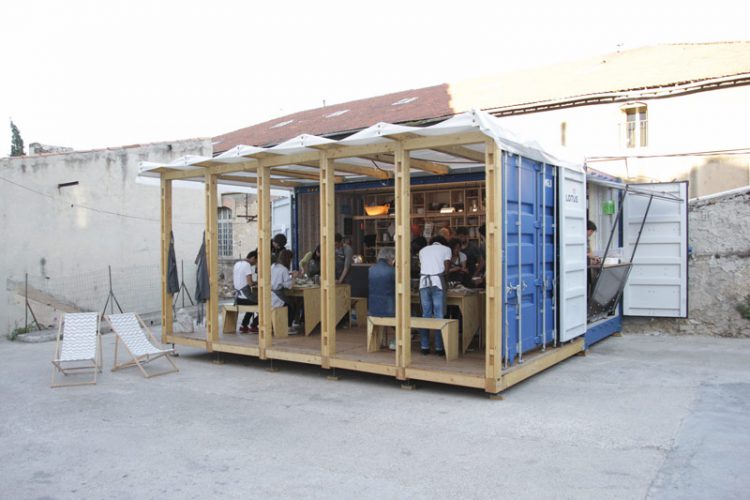 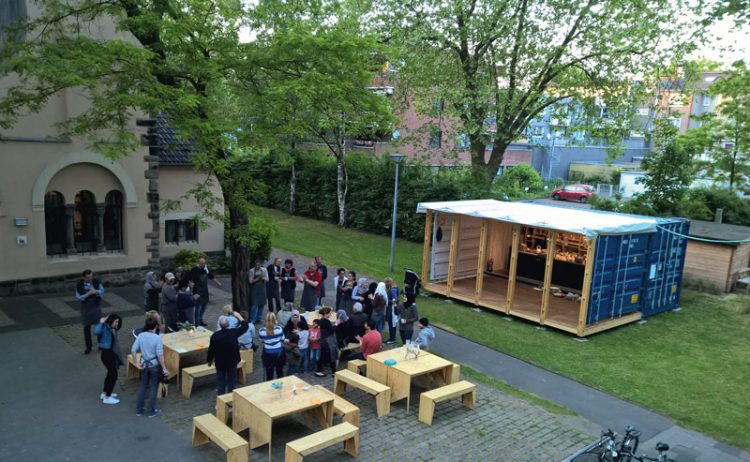 Evangelische Gnadenkirche Duisburg-Neumühl. In the otherwise of old colliery houses, prefabricated buildings and highways crossed quarters, the churchyard next to the market place offered us an idyllic location. Formerly founded around a colliery, Neumühl district is now one of the socially weaker neighborhoods of the 480,000-inhabitant city of Duisburg.

In the village-like district of the working class, a robust cordiality is at home, but so are the consequences of the demographic Change is clearly visible in the cityscape. Far more than 1,000 refugees live in three different accommodations, sometimes in desolate conditions, within walking distance of the container. A place to go with Kitchen on the Run. Nowhere else are we so close to the refugees. The many people from the shelters, often without cooking facilities, love the container. In addition, our kitchen table becomes the meeting place of the generations. Especially during the month of fasting Ramadan spreads on a large expanded board in the open air a magical atmosphere above the churchyard – goose bumps included.

Geertruidentuin. With just under 100,000 inhabitants, the tranquil city on the IJssel was the smallest location of our trip. There, the container stopped on an open space in front of a former hospital, where today several start-ups have set up.

Deventer is a small town with short distances. When we first visit the local refugee shelter in a former furniture factory, we realize the need for digital and local mobility for people. Here, too, the refugees live in a largely provisional hall, but it is equipped with Internet access and every inhabitant is a bicycle available. We are impressed by the commitment and the remarkable number of refugees who already speak the language well. Overall, we can feel the social interaction and the balance in the city. The positive conditions for the integration of refugees distinguish Deventer from our previous locations. Sometimes we catch ourselves wondering if we are needed here with our project. 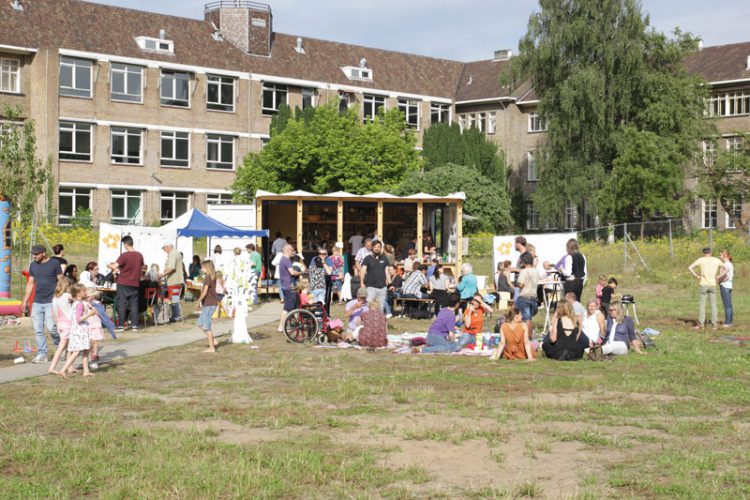 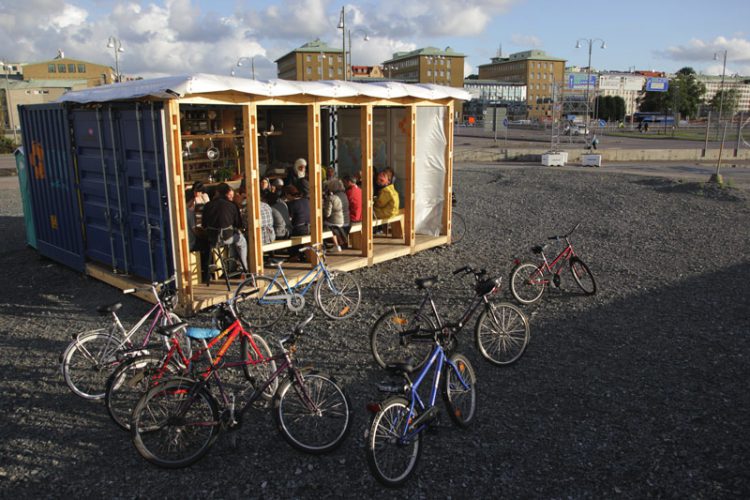 Masthuggskajen. Directly at the port of Gothenburg, the container was facing the water, surrounded by a small group of conspecifics. The address Emigrantenvägen – Emigrantenweg refers to the many Swedes who set out in the hope of a better life in America in the 1920s. We have the impression that many of the refugees we meet in Gothenburg are very well educated and consciously come to Sweden to find the best future opportunities in this Scandinavian country. Nowhere else in the world is communication so easy in the container, because English is almost the common language of all – whether refugees or resident, expats or vacationers. At the same time we learn from refugees again and again that they perceive many Swedes as very friendly and helpful, but at the same time as reserved and distant: The basic care in Sweden is good, but the step towards friendly relations between refugees and resident seems very large. A feeling that can be felt in parts for us as well. Not least the members of the International Opera Chorus of the city and the group of Swedish and refugee hikers of asylum seekers – för human flyktingpolitik – show us a whole other side. More human heat between different cultures does not fit in a container.

Berlin – Bauphase. Everything started here. In a parking lot directly in front of the building of the Technical University in Berlin, the container was delivered shortly before Christmas 2015 and converted until the departure in March 2016 into what it is today: A functional and very comfortable kitchen.</ p>

Berlin – a first journey comes to an end.The container will be received brilliantly after his trip to Europe. After being allowed to make a brief stopover in the ministerial gardens of the Hessian State Representation in the immediate vicinity of Potsdamer Platz, he is the guest of honor at the Federal President’s party in the garden of Schloss Bellevue. Joachim Gauck snipes and eats in person with us Tabouleh and thus honors the commitment of the entire Oversight Community. These days and weeks in the late summer of 2016 are all about retrospective and narrative. We notice how many different and moving moments we have experienced and how important it has been to share these many stories, to encourage, inspire and ensure that the journey continues in 2017. 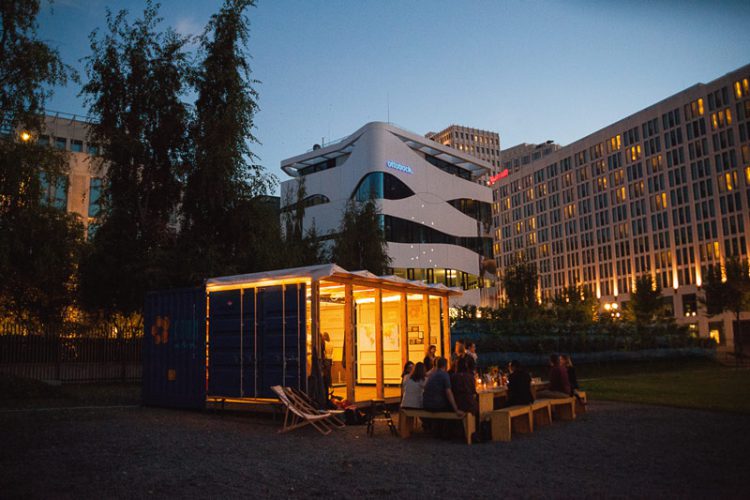 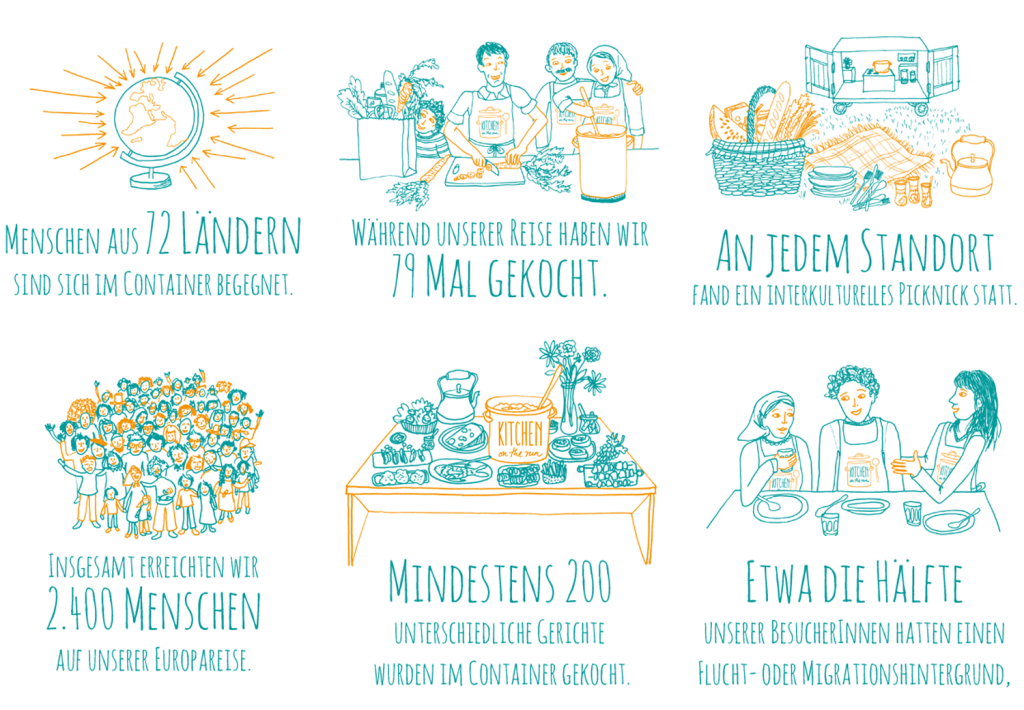 All in all, 2,400 people of all ages from more than 70 different nations met at nearly 80 cooking events on the European tour. We left traces at all five locations. Refugees met for the first time residents at eye level, residents met for the first time refugees. Positive experiences and personal encounters refuted prejudices and aroused curiosity. Contacts were made, telephone numbers exchanged, networks created. At first strangers laughed and cried together, danced and sang together.