Dear Ruhr Valley, we just set a new record: 574 people from more than 20 countries cooked together with us from May 17th to June 10th. As many as never before at any of the Kitchen on the Run locations. We are almost hitting the finish line of our journey and just arrived at our fourth location in Deventer, Netherlands. For yesterday’s world refugee day we took the time to look back at what we have achieved so far. we want to share our experiences with you and encourage you to open your doors and hearts, too. 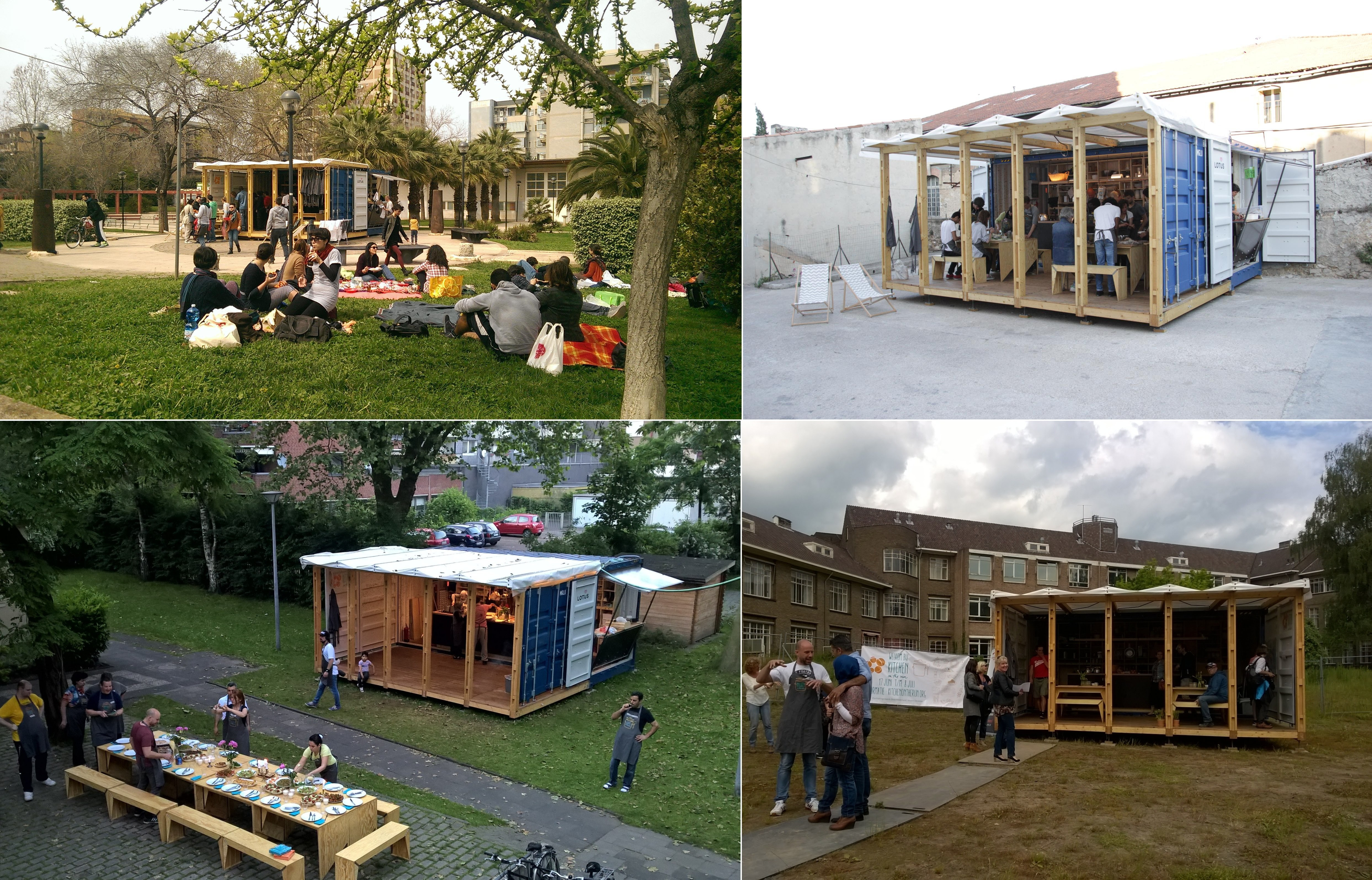 In Italy and France we already observed that some of us dared to dance. By now dancing in the container has almost become a routine for us – no matter wether in one big circle, as a couple or with a baby on one’s shoulders. Jumping around with strangers is almost contagious, we always joined the group. Sometimes we just listened Music from our mobile phones, sometimes someone even started singing. We did enjoy that a lot. 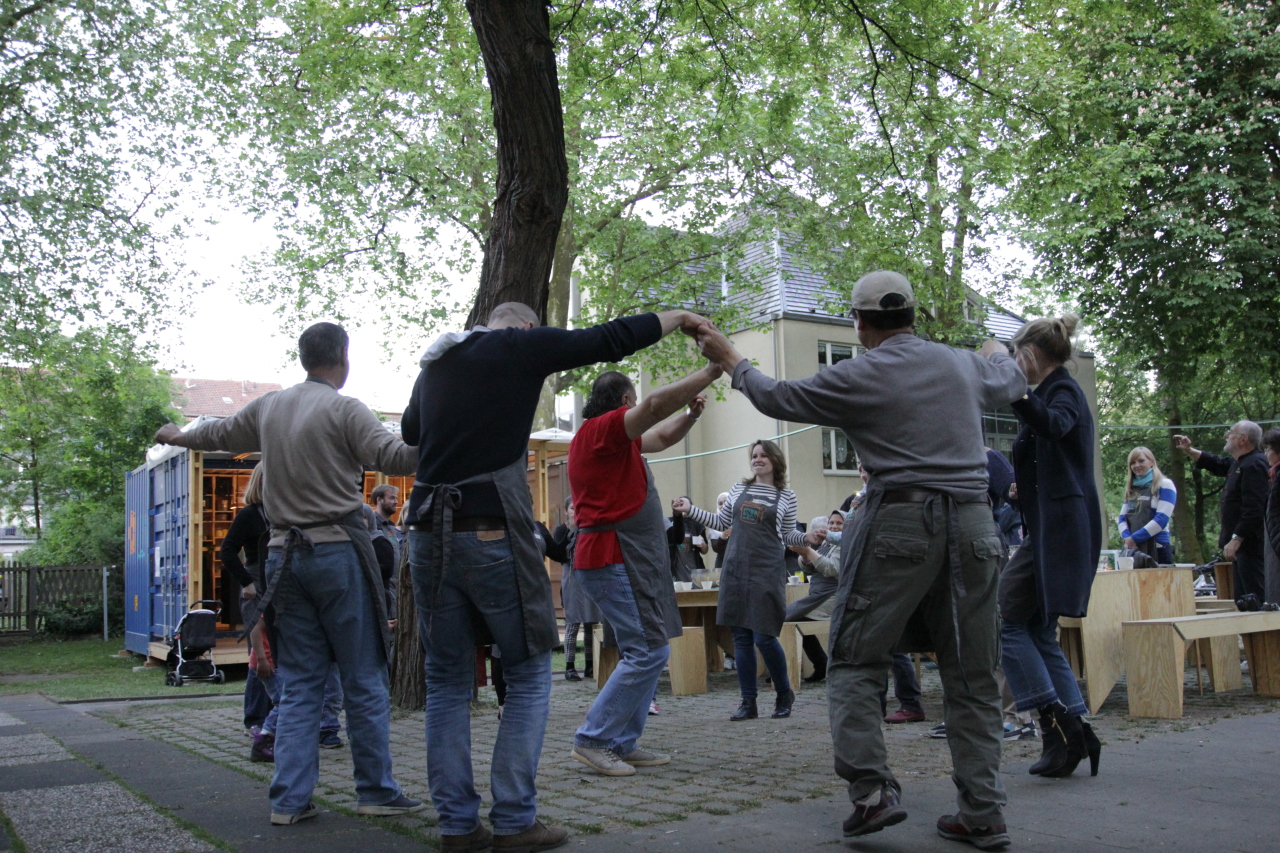 Besides from traditional folksongs and prayers, some very special sounds could be heard in the container. That one evening, when it started raining, there was suddenly choir in the container and an E-Piano! They sang the first articles of the Human Right Declaration. You can get an impression of that touching moment here. We are especially happy that some of the Iraquis who cooked in the container now joined the choir.

The islamic fasting month of Ramadan has just started. From Sunrise to sunset Muslims are supposed to resign  from food, some also don’t drink water. We adjusted to that and started eating a lot later than before.

We were also invited to join a very special evening at the big mosque in the quarter of Marxloh. It was a feeling a bit like christmas when we were strolling around on the big market at the parking ground, where cotton candy, sweet and non-alcoholic cocktails were offered – after finally the sun had set. This special atmosphere in the mosque and the open-hearted muslim community we won’t forget.

Who would habe thought of that: Jule wears a tattoo of an anchor on her finger. And when she was grocery shopping with Mohammed from Syria she was quite surprised to see the same tattoo at this finger. They both not only shared the image but also their love for the sea. 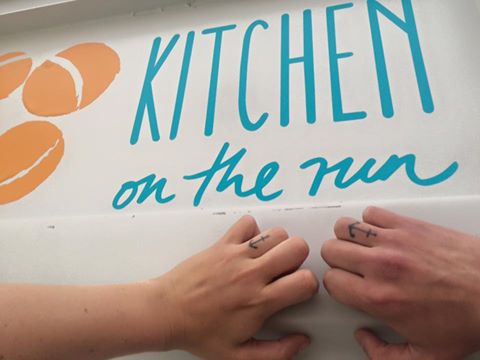 We are happy to how much media coverage of Kitchen on the Run received in Duisburg. Not only in local papers, but also on Spiegel Online, in Deutsche Welle and in public German broadcast WDR there were reports. Besides, even the major of the the city,  Manfred Osenger, came to cook with us in the container. 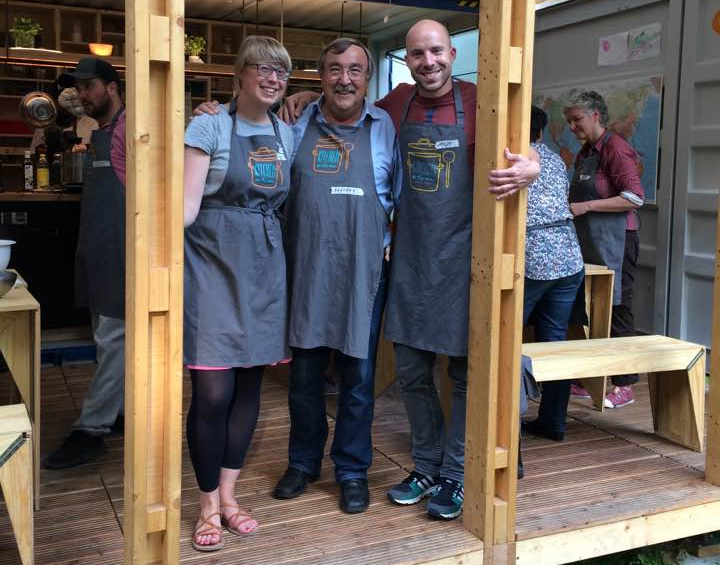 On Mai 26th it was exactly one year ago: Rabea and Jule won the European funding of Stiftung Mercator. Without these 50.000 Euro the project might have never started like this. If we look back on how much has happened since then we are all astonished.